I adopted Meg from the North Melbourne Lost Dogs Home in July 1997, she had been adopted from the home previously, but returned when she was 18 months old because her owners wanted to “travel”. I adopted Meg because she was one of two adult cats in this section at the time, the rest were kittens, and I knew that people would more likely adopt the younger cats. So I adopted the two adult cats Meg and Sophie.

I flew them both to Brisbane in 1999 when I relocated here. Sophie passed away in 2000. Meg and I spent 15 years together until she passed away on 9th September 2011. She never left my side and was the most faithful of furry felines. I miss her cuddling in to me at night. She was a wonderful cat and I am so thankful that I adopted her that day. She was cremated and is home with me now.

While the grief is overwhelming at times, it can never take away from the love that she gave throughout her long life. 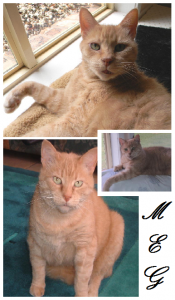