Shara was a Lhasa Apso x Maltese who passed away on January 4th 2007, after being diagnosed with Liver Cancer only three weeks earlier. She was only 6 years old. Shara belonged to my Dad, Kevin and was his shadow. He bought her from a pet shop when she was only 6 weeks and they were inseparable. She lived her life in Ferntree Gully, Victoria, along with her best friends Rocky & Kimba. She had three litters and I have one from her first, Chloe Moo.

It broke Dad’s heart to have to put her to sleep but there was nothing we could do. She was everything to him, always meeting him after work and sleeping on his clothes at night. We buried her out the back in her bed with her favourite T-shirt. Life just isn’t the same.

We miss you angel, not the same visiting anymore. Rest in peace baby girl. xoxo 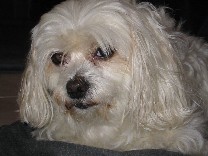