Buffy was a well-known entity in Williamstown. He loved sitting outside Williamstown Safeway getting plenty of pats from the shoppers while we shopped. He was also a member of the Williamstown Pooch Park Club (off leash park) and made lots of friends on his morning and evening walks. Buffy was a lay back, very casual companion who demanded lots of love and affection which was given back to us ten fold and more. He was very photogenic and had his photo taken many times by overseas visitors on his Saturday and Sunday afternoon trips to Nelson Place for his ice cream and our coffee. He developed cancer in his front leg. The operation to remove the cancer (performed by Dr. Chris Preston) took approximately ten hours and was the first of it’s kind in Australia. However 2 days after the operation a blood clot took him from us. 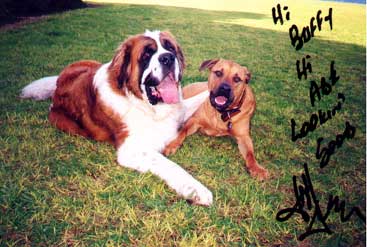 Photo of Buffy with his best mate Abe at the Williamstown Pooch Park (autographed by Dr. Harry)

Buffy has now joined Cassie in heaven, another one of our Saints looking down upon us. You know we miss you and will always love you Buffy, Kevin, Sandra and Jessie.