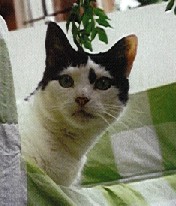 You lived with me for 6 years before dying from lymphosarcoma, after six months of treatment, at the age of nine. You broke my heart beautiful boy and I still miss you.

I was never lonely coming home because you were always waiting at the door before racing me to jump on my bed. You were such a big, gentle cat with a big heart and beautiful blue eyes and I love you so. When you lay in the sun, your fur was so black that the colours of the rainbow came off it.

(His previous owner couldn’t keep him and I took him in just before he was to be handed in to the cat shelter at Greensborough. His two friends were already handed in. He spent months under my bed before he would trust me only coming out at night after I’d turned the lights out.)