Bonnie and Muffin were a couple of Black Toy Poodles whom have both passed
away this year, Bonnie in February and Muffin in July just a week ago. They
were both 15 years of age and they were commissioned from Sylvenus Kennels
in Perth WA in 1996.

My wife Pam and I fell in love with this little pair as soon as we saw them
although there was a time a while later when Pam had second thoughts about
just what we had brought home that day. From the onset Muffin our little boy
bonded with Pam and Bonnie our female bonded with me, I don’t know why but
that is how it was until February this year when bonnie became so very ill
and I held her in my arms all night and then we had to send her to Rainbow
Bridge to ease her suffering, there was nothing else we could do and we both
cried for a week about the way she went.

Muffin missed her of course but with two people to love him now he settled
down to being at last the ‘top dog’ in the house. He was such a character
and we knew he was getting too old for long walks and stuff like that so we
just let him roam around the garden when he needed a pee etc.

Now we have always had a doggy door and it was only in Muffin’s final week
that he let us down, as he never once fouled the house even when he was very
ill. But in that last week he was so sick that he vomited a few times before
he could take himself outside but we loved him so much that it just didn’t
matter a bit.

Bonnie being a female did have a problem with urination in her 14th year but
we put her onto propanol and that stopped her from any further accidents
quite quickly.

On that last day we took him to the vet for yet another inspection of his
poor little body as he would not eat after 15 years of devouring everything
that was given to him, and we made that awful decision to end his suffering.
The nurse held him and the vet did what was required and he looked into our
faces and I tell myself that he was saying “thanks Mum and Dad”, but he was
such an intelligent little guy he could have been thinking “what is
happening now, and why”. 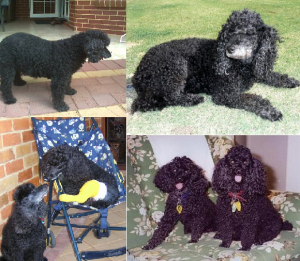 In 50 years of marriage we have had numerous dogs and a cat from Labs to
setters both English and Irish and another Poodle too, but this last pair
really did take hold of our lives and our bank account too as they must have
cost us thousands of dollars but so what, we loved them to bits.