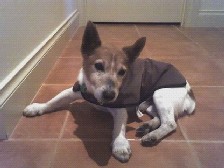 You were a very special friend, you enjoyed your walks and playing with your companion friend Scruffy. You loved to cuddle up on my lap at nights. As you grew older and weaker I would pick you up for a cuddle and you would rest your head on my shoulder and sleep in my arms. Your walks became less often as you didn’t have the strength. I provided you help when it came to meal times, helped you to get in and out of your bed and kept you comfortable with lots of love and care. I miss doing that for you. I tried to keep you going for as long as possible without you suffering, you couldn’t see or hear and developed a condition known as Cognitive Dysfunction Syndrome (CDS) which is like Alzheimer’s but you still kept battling on and wouldn’t give up until your CDS gradually became worse, you grew frail and became too weak to lift yourself up off the floor on your own. You loved your food but once you gave up on that I knew then it was time to let you go. You had to be put to sleep on the 15th February 2007 at the age of 16 years and I held you till the end and spoke to you until you were no longer able to see. That was the hardest decision I had to make as I didn’t want to let you go. You are now at peace my friend. You will be in my heart and loved forever. Scruffy still looks for you and we are both missing you deeply.