Jessie was a beautiful golden Cocker Spaniel of 12 years – when she was diagnosed with TCC cancer on her nose Tuesday 12th April and was put to sleep on Saturday 16th April 2005 at Mansfield vets. Jessie was bought in Chelsea, Victoria in January 1993 from a breeder, her first outing was at Chelsea beach, so she loved holidays to Apollo Bay, Mansfield, Heathcote and lived with me in Newport, near Williamstown beach. Jessie was very spoilt, and much loved by everyone who came in contact with her…She now rests at Howqua in the high country.

Love you Jessie – hugs and kisses from your best friend Melissa – you will always be in my heart. 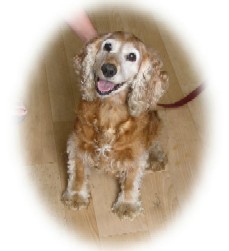