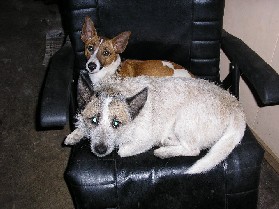 You were only 6 weeks old when Aunty Meaghan got you for me. Even though you weren’t what I was looking for, I couldn’t say no. We did everything together and if I went somewhere without you people would ask “Where’s Marty?” We were practically inseperable. You were my son Crunchy. You were ball crazy, even a bit of rubber would keep you occupied for hours! We found your girlfriend Jessie, a Jack Russell x last year wandering the streets and even though I didn’t want another dog, how could I take her away from you? You were in love! You and Jessie had 3 beautiful babies a few months later and you were such a proud Dad! Time went on and about 8 months later you had another suprise for me but this time there were 4 of them! Jessie and your babies went to stay with Aunty Meaghan as I was busy with work. You missed her like crazy but I think you were happy to have me to yourself for those few weeks. I took you to work with me and one of my customers kicked a bit of rubber out onto the road and you chased it. You were so determined to get that bit of rubber that you didn’t see the car. You died in my arms on the way to the vet but not before looking into my eyes one last time. That was the hardest day of my life boy. I kept one of your puppies and named him Marty Junior after you. Jessie still looks for you, especially when she sees your soccer ball. I think she’s waiting for you to come running up to play. I want to thank you for the last 7 years Marty, you were more than I could have hoped for in a dog. I’m sure you are playing with my old dog Max who died at 17 years old and Aunty Meaghan’s dog Tigger who you often tried shaping up to (he weighed 70kgs, you were only 9kgs!) and I better not forget your mate Ronnie the Goat! ‘Till we meet again I will look after Jessie and Marty Junior for you. Love you Crunch, Dad xxxx
Brendan (Garfield, VIC)