Her mother was a “rescue” dog who was found to be pregnant with 3 babies. As
we have had Cavalier King Charles Spaniels in the family for more than 40
years and had two at the time it was not difficult to help out and take one
of the puppies – Rowsley. She has always been a quiet and well behaved girl
loved by us. She may not have seen or heard everything but would always see
and bark at the animals on the television, which she would watch from her
bed. Earlier this year we added to the family a Ruby puppy girl and Rowsley
enjoyed a play and teased her with the squeaky toy (a red devil). She would
pinching it from the pup and showing it to her and quickly twisting her head
away so that the pup could not get it. She would also squeak it at the pup.

“Another beautiful girl who wagged her tail until the day she went to play
with all the other old & beautiful Cavalier King Charles Spaniels”. 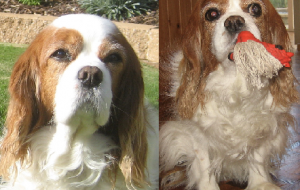 She is missed, but will always be remembered.